Lin Cooper was the founder of Jacobs Field Lavender.  Her idea of a lavender field has blossomed into a not-for-profit that is bringing unique educational opportunities to the children of Islip.  By her inspiration, we continue to grow lavender and make products to gain revenue to fund projects for the local school and provide educational opportunities on Jacobs Field. 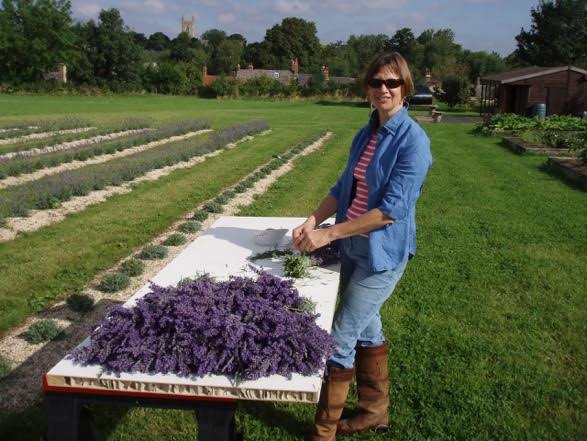 Lin spent her childhood in the village of Islip.  She was a pupil at Dr Souths School, one of the beneficiaries of Jacobs Field.  Lin enjoyed the sewing and cookery lessons and won awards for her work and effort.  She played with the other village children in the fields, swam, and caught sticklebacks in the river.  Lin’s mother, Peggy, was the youngest sister of four siblings who where the last generation of the Beckley family to reside in the village.

The Beckley family can be traced back to the 1600s.  They were fishermen, fishing the River Ray and selling their catch at the market in Oxford.  The Beckley’s were awarded the fishing rights to the River by Oliver Cromwell in gratitude for their assistance in ferrying parliamentarian troops across the river during the siege of Oxford.  Sometime in the 1870s the river became impossible to fish and William ‘Fisher’ Beckley turned to farming.  The Fisher title stuck and Lin’s Grandfather was known as Fisher Beckley.  He fought with the Oxford and Bucks Regiment in the Great War and was injured in battle.  Having returned from the war he befriended the renowned poet Robert Graves.  In fact, Robert makes reference to Fisher Beckley in his book Goodbye to All That.  They sat on the local council together and successfully campaigned for the construction of affordable housing for ex-servicemen and farm labourers of the Village.

Sadly, Lin is no longer with us as she passed away in November 2012. Her unique spirit lives on in Jacobs Field as we continue to honor her vision.  There is a new building on the site of Dr Souths School named the Lin Cooper Practical Skills Building dedicated to teaching art, music, theater, and cooking to the local school children.   The children of the Dr. Souths school also  have several allotments adjacent to the lavender field where they grow vegetables and fruits.  There are also forestry classes  on the field led by a certified forestry instructor.   Additionally, a new classroom building is being built this Spring so that the children will have the use of a  modern classroom while on Jacobs Field. Check out our photo gallery for pictures of the rebuilt schoolhouse.

Our Continuing Story
Go to Top